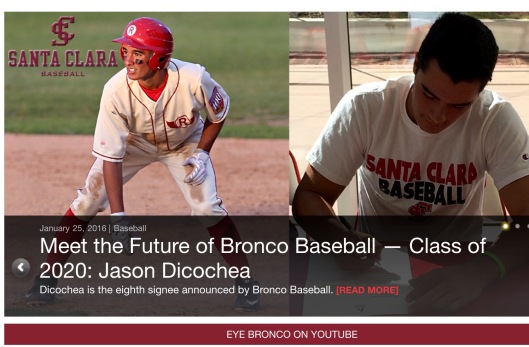 Photo re: Jason committing to play baseball at University of Santa Clara

“I question the reasoning behind the application of the following terms when mistakes are made: someone was “trying to hard”, “trying to do too much”, or “thinking too much”.

I guess it’s a matter of interpretation but those phrases just don’t make much sense to me, whether in baseball or on a larger scale, life!  Generally they’re used in sports when someone makes mistakes while attempting to complete routine or ordinary tasks during a competition that one is generally expected to perform.  For the sake of argument, let’s assume that nothing is “routine” since it takes a lot of work and practice for you guys to do what you do so well to make them look routine.

Boys this as much about the mental, emotional, and physical preparation needed before games and then during every pitch, at-bat. play, etc.  Baseball is a game of precision!  Your practices and the habits you develop must be perfectly precise so that any unexpected deviation in a play is not met with instant anxiety or panic.  That’s where the mental and emotional control is essential.

Let me equate it to combat soldier terms – not as extreme but you’ll get the gist.  Teams are like a platoon of infantrymen whose performance as individuals protect and benefit the group.  Your preparation and perfect execution of your required roles is imperative to not only your survival but your fellow “band of brothers”.  Any deviation from your attention to the details, concentration, and focus will have a negative impact on achieving the platoon’s objectives and success of any operation.  It’s no accident that during the first half of the 20th century, some of the best college football teams and athletes were from the service academies because of their advanced discipline, training, and being taught abounds coordination of units.

At this stage, you have had a lot of different coaches who are presumed to be “experts” regarding baseball and they may well be in certain areas.  Just remember that you guys are the only ones who are experts about “YOU”, and have a better understanding of what works for you.  This is not little league and you are beyond the time of major overhauls to your swing, fielding, throwing, etc., so filter through the overwhelming information provided and use only that necessary to correct what should be simple flaws.  Moreover you know what’s needed to achieve what is required of you and I’ll bet you already know (or should know) when you haven’t prepared enough or done it incorrectly. You have made it this far because of your gifts.  If there is a problem, fix it NOW!  If your process is too complicated, simplify it!  If your mind is scattered, narrow things down so it’s only focused on what matters at the time! You owe it to yourself and your “brothers”.  When you comprehend that you have greater responsibilities, you’ll understand how important it is to fulfill all aspects of your obligations.

So bottom line is put the perfect work and preparation in so that the performance reflects both.  Be a master of each situation because your mind is centered around nothing beyond it.  When observers take notice, let them frequently comment that you “are so consistent”, make it look “so easy” and “so natural”, or “always doing the right thing”, “having a baseball mind” and “a model of concentration”.  It only matters that you know what it took to make it occur that way and that YOU control those perceptions.

Oh and FYI, as you put this into practice, you may be surprised how it applies to the life you will lead and the objectives you will eventually add to those that currently exist!