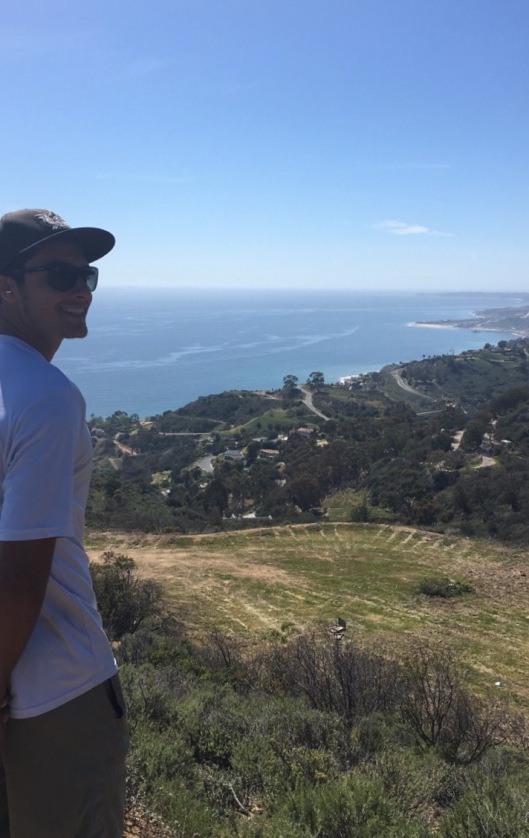 (Jason At The Top Of Malibu, With Dreams As Far As His Eyes Can See – Photo Contributed By Brenan Knott)

SHARING A FAVORITE EXCERPT WITH FULL VERSION TO FOLLOW – WISHING ALL A HAPPY EASTER!!!

“When you learn to harness the power of your fears, it can take you places beyond your wildest dreams.” – Jimmy Lovine

…So as I sit here thinking about this and how it relates to my own personality and maybe those of others, I sense something that I have to continue to remind myself.  Fear is a natural consequence of any basic endeavor, especially those that give rise to spectacular rewards that aren’t always obtained at the first, second, or subsequent multiple attempts thereafter.  And with every failure, there is the potential that the fear will grow so disabling that it closes down our capacity to see beyond it, and/or we act to counter it by not only running from it, but racing unknowingly towards that which can betray our mental, emotional, and physical sanctuaries.  It just happens but in thinking about what my Dad used to tell me about his service as a Marine in Korea and what someone shared with me some time ago, it probably doesn’t have to.

Think of this for a moment:  With every dream, their generally exists elements of fear about whether it can come true, whether we have it in ourselves to accomplish it, and whether it’s deserved once it happens (yes I’m speaking for myself).  But someone told me that fear will be present in some manifestation and it’s not as important to understand its primeval or complex causes, or to even ignore it’s presence, but to become somewhat “neutral” to its existence as we attempt to establish our footholds on the ground where all of our journeys need to begin.

Upon quiet introspection about that thought, I came across a quote by Winston Churchill which I found meaningful for purposes of this topic:  “Your greatest fears are created by your imagination.  Don’t give in to them.”

A reasonable and honest assessment through life’s occurrences has given me a better understanding that fear has no specific personality, intention, voice, agenda, or power when it’s isolated down to its fundamental and figurative makeup.  Therefore its elements and other related forces are often nothing more than what we create, invent, interpret, or assign to them in our minds and thereafter, maximizing it so that it’s no longer manageable.  In a sense from that point forward, we have given fear an immortality that surrounds our ability to generate any sensible freedom in how we act and react while in search for a greater glory of a life to be fulfilled and shared among those who we are so fortunate enough to affect in some productive manner.  Just rereading the foregoing leaves me somber in thinking about how many times I’ve cheated myself by creating scenarios that really never existed, at least to the extent I allowed them to restrict me.

So what has all the foregoing reflection revealed?  To me it’s best summed up by the following quote with a little elaboration:  “Courage is not the absence of fear, but rather the judgment that something else is more important than fear.” – James Neil Hollingworth.

I accept that my mind is not powerful enough to completely exercise fear from it, even though I essentially have created most of its attributes.  What I have to remind myself is that opting for inactivity due to the remote possibility of negative consequences or results is so unnecessarily foolhardy and fruitless.  A better approach seems to weigh the value and importance of what will likely be obtained or achieved by consistently performing the simplest acts to challenge the perception of fear, take that action, and see what ultimately occurs.  I’ve found that the worst scenarios I envisioned about what I might lose rarely come to fruition, merely by making some effort beyond the fear I should never have allowed to restrain me.  And more importantly I discover that what I gain, even the unanticipated, generally adds something more valuable to what I need to know about myself and ultimately my life.

It seems that we owe not only a duty to ourselves, but also those around us, to neutralize the implausible uncertainties associated with something far less than what it truly is, and invest in the exploration of that which can truly BE.  We can’t be satisfied with never uncovering as much of the majesty rightfully reserved for us just because we become a hostage to fears that are unnecessarily magnified through doubt and insecurity.

I’ll leave you with the following thoughts even though they’re probably directed more towards myself but likely useful to others nonetheless.  Remember to speak kindly to yourselves at the advent of each day with the mindset that acting towards what you want and hope for gives you more power than what you fear.  Always be reminded that in essence, fear is just a elaborate facade that can betray and undermine all that we are blessed with to love and embrace in all the days we are afforded, regardless of how some of them ultimately unravel or have unfolded in the past.  I truly believe that there are so many good and positive things which have the best opportunity to reveal themselves by simply channeling our thoughts and actions in their direction while continually exercising a durable faith in ourselves no matter how that belief is tested which, it undoubtedly will be depending on the importance of what is at stake.  And maybe, just maybe, by accepting that those tests await us, we can minimize or “neutralize” those fears that may otherwise exploit our perceived inadequacies.

So as I sit here watching the sun slowly work its way behind the water, I’m already contemplating what may be revealed to me after it reappears and what I will do upon their presentation.  I have choices within my control that will consequently reveal what I can gain from each new day or alternatively, what I’ll sadly never uncover, and those choices are thus:  how I think of and for myself, how I see myself participating in the life I’ve been afforded, what action I will take based on the best thoughts I can generate, and most importantly, committing myself to continually offering my best towards what I see for myself even when I feel less than my best or when the best results have not yet occurred according to my timetable or my satisfaction.

…I’m convinced there is absolutely so much to gain by living with a sense of optimism with the simplest belief that what we envision is obtainable, even though we may not have perfected the manner of its exact fulfillment.  But here’s a final quote that crosses my mind when I find myself wavering under the burden which sometimes tests my faith in the quality of how I wish to exist:  “The most difficult thing is the decision to act, the rest is merely tenacity.” – Amelia Earhart.  I think the greatest tragedy in life is not the lack of success in light of our efforts but rather, never learning what could have been ours had we just overcome the fear of failure and acted in the face of it since when adequately broken down, how real is it anyways if it’s only a product of our creation?  Just thinking.