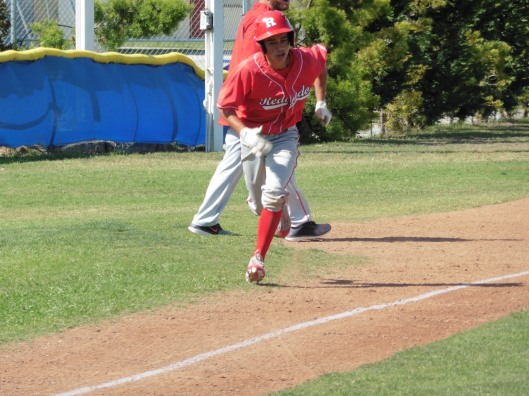 Who knew that Albert Einstein knew so much about baseball!

You have to remember that there have been MLB mvp’s that were not prototypical power or high average hitters.  There have been exceptional role players who were so excellent in doing their roles that they were the catalyst behind the overall performance of their team, even if the numbers by themselves were unremarkable, ie, defense, base running, situational hitting, leadership.

With that being said, remember this: On defense make all the routine plays, make the exceptional plays look routine, and have the incredible plays soon taken for granted because you make them so frequently.  Hit or throw through your cut off, don’t make needless throws that can cost a run or put a man in scoring position, think about “plan B” in a double play you can’t turn with men on first and second and see if the guy rounding third might deserve a quick throw.  In fact always think about reasonable options because if the ball is in your hand, you determine when the play is over.

Strive to make each at-bat productive and not something exciting to the average baseball fan.  True baseball fans, scouts, and coaches, know the difference and the importance of an executed bunt, hit-and-run, sacrifice fly, and perfectly placed ground balls to move runners into scoring position or scoring them from third.

So with all that being said and given the fact that there’s a lot that has to be processed during each play of every game, especially where you have significant and even marginal opportunities to make things “count”, I’ll leave you with this quote.  “If you cannot do great things, do small things in a great way.” – Napoleon Hill.  Added up, they turn out to be “greatest” results as it relates to not only baseball, but all the “great” things you want for yourselves and others in your lives!